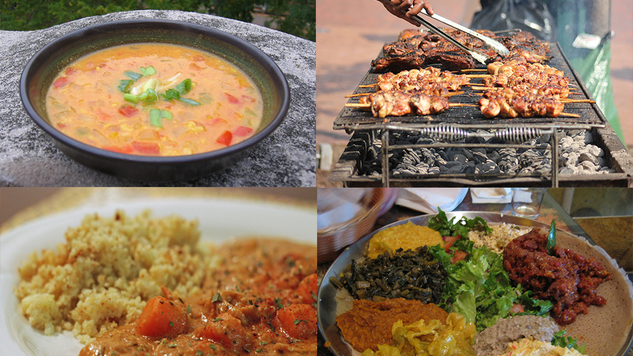 African cuisine is as diverse as the hundreds of different cultures and groups that inhabit the continent. This diversity is reflected in the many local culinary traditions in terms of choice of ingredients, style of preparation and cooking techniques. Many of the dishes are also affected by the subsistence nature of living in many parts of the continent – you find farmers, herdsmen and fishermen everywhere. The crops they grow or the animals they keep thus affect the popular dishes in their regions.

The dishes have also been influenced by foreign visitors and invaders. The food of North Africa has been heavily influence by the Phoenicians of the 1st century who brought sausages, followed by the Carthaginians who introduced wheat, then the nomadic Berbers adapted the semolina from wheat into couscous – a main staple diet in the region. From the 7th century onwards, the Arabs introduced a variety of spices, like saffron, cinnamon, ginger and cloves and, from the New World, they got chillies, tomatoes and potatoes.

In East Africa the Arab influence on cuisine is evident. Settling on the coast over 1,000 years ago, the Arabs sailed in with rice and spices, particularly noticeable in the Swahili foods of the coastal regions. They also brought lemons, organdies and domestic pigs from China and India. Next came the British Empire and with it Indian workers who brought their foods with them, such as spiced vegetable curries, lentil soups, chapattis and pickles. The British themselves also influence food by bringing in new breeds of sheep, cattle and goats along with high-quality coffee.

As we go more inland, even though cattle, sheep and goats are widespread in eastern Africa, they are often regarded as a form of currency and a store of wealth by pastoralists. So while they may be used for dairy products, they are not often used for their meat. Many people in the eastern region therefore rely heavily on mainly on grains, beans and vegetables, with fish providing protein in lake and river regions.  One of the most widespread staples in eastern Africa, and in southern Africa too, is ground maize. Maize flour is cooked with water to form a stiff porridge or dough – called ugali, nsima or sadza, depending where you are.

It may be neighbouring East Africa but the food in the Horn of Africa is very different. Here the Islamic and Christian faiths have greatly impacted the food. There is no pork for starters, and as for Coptic Christians they adapted to the meat-free fast days with an increased use of pulses, lentils and chickpeas. The main traditional dishes in Ethiopian  and Eritrean cuisine are very similar and both are dominated by tsebhis (stews) served with injera – a flatbread made from teff, wheat, or sorghum, also found in Somalia. In Somalia an interesting addition to their cuisine is pasta, which arrived with the Italians in the 1880s, and sweet dishes that came with the Arabs and Yemenis.

Just before the British and the Indians, the Portuguese came to Africa and introduced techniques of roasting and marinating. This is evident in East Africa with the nyama choma (roast meat) culture, but also in Southern Africa.

Southern Africa has the most varied cuisines of any region on the continent, this is a result of the blend of cultures – the indigenous African tribal societies, European and Asian populations. Most of the African ethnic communities have diets that include meat and milk, some vegetables and grains. The Portuguese influence saw the introduction of piri-piri (chilli seasoning) into the region, and the European settlers brought with them curing techniques that produced the infamous cured meat – biltong.

West and Central Africa were far less influenced by the European settlers. Centuries before the Europeans arrived, West African people were trading with the Arab world in spices and thus typically West African food is filled with hot spices.  With the least contact with the “outside world”, Central African food remains the closest to traditional ingredients and cooking techniques. The only notable adoption of cassava, peanut, and Chile pepper plants arrived along with the slave trade during the early 16th century.

After careful consideration of the various regions and cross-boundary recipes here are the top 20 most popular dishes on the continent:

Cured meat exported all over Africa, originally from South Africa

Very popular in West Africa, it is made by boiling starchy food crops like cassava, yams or cooking plantains and then pounding them into a dough-like consistency

A form of fried bread, taken in sweet or savoury form, popular in East Africa

A sourdough-risen flatbread with a unique, slightly spongy texture, popular in Ethiopia, Eritrea and Somalia

The most popular rice dish in West Africa, the most common basic ingredients are rice, tomatoes, tomato paste, onion, salt and red pepper

Many different names and cooking techniques, but meat roast over charcoal is popular all over the continent

Made from steamed and dried durum wheat, couscous has become a popular alternative to rice and pasta in North Africa

A fresh tomato and onion salad dish popular in the cuisines of Madagascar, East Africa and the African Great Lakes region

A historically Berber slow-cooked meat, chicken or fish dish from North Africa, named after the type of earthenware pot in which it is cooked.

Found anywhere that plantains grow, this is a staple on the continent and served with meats dishes.

With Indian origins, these rice dishes are fragrant and flavourful, mostly popular along the East African coast.

A highly flavourful and spicy Ethiopian or Eritrean stew that is prepared with meat or a variety of vegetables.

A typically Portuguese stew of beans with beef and pork which is popular in southern Africa.

A famous and popular West African stew with meat simmered in a sauce thickened with ground peanuts.

Cooked with water to a porridge or dough-like consistency, this is the most common staple starch in East Africa, the Great Lakes region and southern Africa.

A hot and fragrant sauce originally from Portugal but widely adopted in southern African cooking.

Share thisFacebookTwitterPinterestEmailWhatsAppAfrica’s 20 most popular foods: Biltong, fufu, injera, couscous, ugali anyone? African cuisine is as diverse as the hundreds of different cultures and groups that inhabit the continent. This diversity is reflected in the many local culinary traditions in terms of choice of ingredients, style of preparation and cooking techniques. Many of the dishes