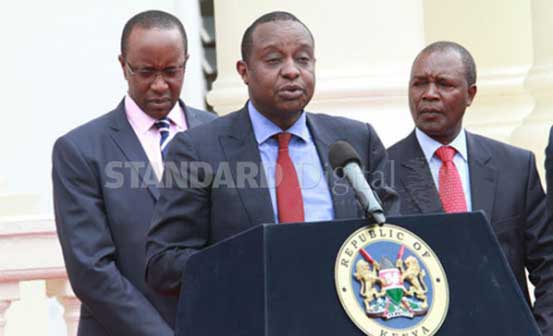 Kenya could become the first African country to tap global debt markets this year as it begins a bond roadshow this week, but Eurobond financing is likely to remain out of reach for most of its peers on the continent. Bond sales from sub-Saharan Africa, which had previously been booming, are yet to start in 2016 after a stormy start to the year for commodities and currencies that has left some countries on the brink of crisis. Despite the difficulties, some African Eurobonds have been outperforming, thanks in part to the bounce in oil and metals but also on the back of some potential turnaround stories, something all investors love. Back in January investors were demanding record premiums of 620 basis points to hold African bonds rather than U.S. debt. That has now fallen back to 550 bps, with oil importers Kenya and Ivory Coast topping the list of winners. An investor-friendly debt swap by Mozambique’s state-run fishing firm has also helped sentiment, as has struggling metal miner Zambia starting talks with the International Monetary Fund. READ MORE IMF trims Kenya’s growth outlook for 2016 to 6pc Hold to account those who steal public funds Kenya’s interest on Eurobond to hit Sh17.8 billion this year Now some countries could leverage the improved mood. Kenya’s presentation, led by finance minister Henry Rotich, is billed as a ‘non-deal’ roadshow but it is likely to be at least a test of the waters. “(Kenya) could probably issue. Aside from the 8 percent budget deficit, it’s a pretty good story,” said Kevin Daly, a portfolio manager at Aberdeen Asset Management. “The currency is stable, domestic rates are coming down, inflation is starting to fall and growth is in the 5-6 percent range.” The World Bank this year singled out Kenya as an African bright spot, with economic growth accelerating thanks to cheaper oil, a solid agriculture sector, and infrastructure investment. The yield on its existing 2024 dollar bond is down to around 7.75 percent from it 9.8 percent January high. But to warrant the extra cash, any new 10-year bond will need to have a premium of up to 50 basis points on that, investors say. But other African countries will have to pay much more. Countries such as Ghana, which is also holding a roadshow next week, could find itself having to pay double-digit percentage coupons.
Read more at: http://www.standardmedia.co.ke

Africa watches as Kenya prepares to test Eurobond waters Kenya could become the first African country to tap global debt markets this year as it begins a bond roadshow this week, but Eurobond financing is likely to remain out of reach for most of its peers on the continent. Bond sales from sub-Saharan Africa, which