Inside the bus used by Craft Silicon Foundation as a classroom for computer classes in Kawangware, Nairobi. The vehicle had its interior customised, its seats removed and replaced with 64 chairs and 32 reading tables. Each table has a computer desktop, modifications that have turned the ordinary bus into a typical computer lab. PHOTO | FILE

It is 11 o’clock. Ruth Wanjiru and her friend jump out of a 72-seater bus parked at a chief’s camp in Kawangware, Nairobi.

Minutes later, a group of teenage boys and girls alight from the bus, some clutching bags, others carrying books in their arms.

Watching the boys and girls from a distance, it is easy to mistake them for regular passengers. But no! The teenagers are not passengers, and the blue bus is not exactly a bus; it is a moving computer classroom.

“We study inside here,” says Wanjiru, pointing at the bus. “This bus is a mobile ICT classroom,” she adds.

The vehicle had its interior customised, its seats removed and replaced with 64 chairs and 32 reading tables. Each table has a computer desktop, modifications that have turned the ordinary bus into a typical computer lab.

Besides the 32 monitors, the computer lab is fitted with specialised servers, education courseware, Internet, printers and scanners. All the gadgets are powered by four photovoltaic cells installed atop the vehicles’ roof. The solar panels trap energy, which is then stored in four car batteries.

“We study computer packages, which are offered for three months. A lesson lasts only two hours,” says Wanjiru, 18, adding they are 32 in her class.

She says she started the computer classes early this year after completing high school last year. Her parents, whom she lives with in Kangemi, run a small grocery kiosk to take care of her and her six siblings.

“My parents’ business does not generate enough money to take me to college. Before, I would spend most of my time at home or doing menial jobs that paid little,” explains Wanjiru, who now runs a small cyber café and photocopy business. 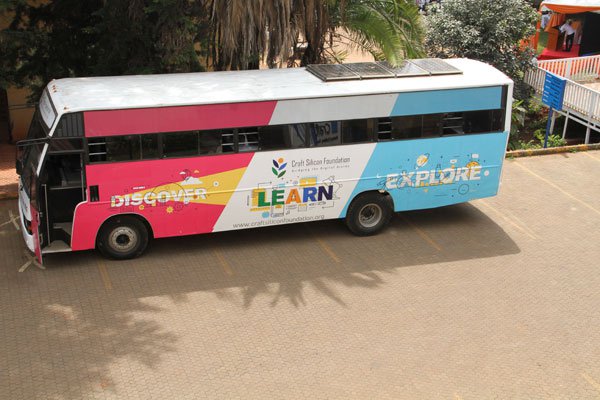 So how did she learn about the computer classes?

“Sometime in February this year, a friend informed me about the mobile ICT bus, which offers free computer classes. I got interested and registered for the programme.”

“It is very convenient for youths like us who cannot afford bus fare on a daily basis to town for  classes,” says Akinyi, a Kibera resident.

Wanjiru adds that before she enrolled for the lessons, she could hardly operate a computer, hence accessing vital information on the Web, such as scholarships or job opportunities, was akin to a jigsaw puzzle.

The October 2015 study, conducted by Web Foundation, covered 10 developing countries including Kenya. It found out that only 37 per cent of women used the Internet, compared to 59 per cent of men. Lack of know-how and high cost of accessing Internet emerged as the major barriers keeping women offline, the report’s authors pointed out.

While Internet use does not necessarily translate into new job opportunities or enhanced income, policy experts believe that access opens up more choices.

Mr Sam Wambugu, an Informatics specialist, says digital technology can be a powerful tool to disadvantaged groups and can improve socio-economic and health outcomes for women, men and children in developing countries.

While access to the Internet has increased over the past two decades, not so many girls and women around the world are enjoying the cyberspace. A recent study titled, Offline and falling behind: Barriers to Internet adoption, estimates that approximately 4.4 billion people are offline across the world, of which 52 per cent are women.

“The differing amount of information between those who have access to the Internet, especially broadband access, and those who do not have access is technically referred to as digital divide or digital split.”

“It is generally agreed that the gender digital divide stems primarily from the structural inequalities that exist between men and women in many societies. This means that women are less likely to reap the benefits of new economic and social opportunities of ICT, including employment and access to money,” he says.

Contrary to a common belief that women may be more “technophobic” than men, a study conducted in 2011 by the University of Southern California, in collaboration with the United Nations, found that women are actually more active digital users than men; if  socioeconomic factors like employment, education and income are controlled.

Illiteracy emerges as the biggest barrier in keeping away girls and women from ‘going digital’. Across all developing countries, about 25 per cent of women are illiterate, compared to 14 per cent of men, according to the Women and the Web study.

Women represent nearly two-thirds of the illiterate population worldwide, with almost 40 per cent of offline women citing unfamiliarity with technology as a reason for not accessing the Internet.

“The project’s aim is to promote universal computer literacy among the youths and young girls in the slums and enable them use computer knowledge and skills to seize opportunities that will make them self-reliant. The programme also aims at promoting development in these areas,” she says, adding that the intervention also helps keep the youth off drugs and crime.

She notes that youths who benefit from the programme are expected to go out into the market and create jobs.

Mr Alex Chege, Silicon Foundation Project Manager, explains that they have three sessions daily, and all the computers are powered by the four solar panels.

“To recruit students, we normally have a street vetting programme. Our main focus is youths, especially those coming from poor backgrounds,” says Mr Chege.

“The programme does not end at the end of studies, we also connect the students with our partners for job opportunities and also offer room for our best students to advance their studies in ICT,” he adds.

Tech experts believe that as ICT increasingly becomes an essential tool in both our personal and professional lives, enabling access to these technologies, delivering relevant applications and services and ensuring inclusion in the lucrative tech sector will become a critical factor in women’s ability to contribute fully to their individual, family and societal outcomes.

According to Mr Wambugu, lack of gender-disaggregated data is among the biggest bottlenecks in addressing women’s needs in technology. As a result, it becomes difficult to determine and draw conclusions on specific usage trends. Poor attention by policymakers in the ICT sector also contributes to the technology dearth among women.

Lack of access to the internet, according to the Women and the Web Survey, is giving rise to a second digital divide, where women and girls risk being left further behind.

That gap soars to 43 per cent in sub-Saharan Africa, where men are almost twice as likely to have access to the Internet as women. The report issued a call to action to double the number of women online in the next three years, both by bridging the gender gap and broadening overall access in developing countries.

Ms Priya’s mobile computer lab programme serves as an example of initiatives that seek to close the existing ICT gap, especially among girls, who are financially disadvantaged.

“We have so far trained 6,000 youths, most of them girls from Kawangware, Kibera, Huruma and Mukuru kwa Nyayo. Our biggest challenge is that we only have one bus, which limits our efforts to reach more young people,” Ms Priya points out.

“The turn up has been very huge and I think we couldn’t have reached such a number had we been relying on regular classrooms,” she adds.

International Centre for Research on Women report examines technology initiatives that have enabled women to develop their economic potential, become stronger leaders and more effective contributors to their families, communities and domestic economies. Specifically, these efforts helped women increase their productivity, create new entrepreneurial ventures and launch income-generating pursuits. The report also offered innovators practical recommendations on how to design and deploy technologies that women can’t afford not to use.

As the government hopes to make ICT companies account for 10 per cent of GDP by 2030 through its Kenya Vision 2030 plan, by using a mixture of business incentives and infrastructure development, building local human and technical capacity becomes necessary.

Mr Joe Mucheru, the Cabinet Secretary for Information, who attended the fifth anniversary of Craft Silicon Foundation which also coincided with the graduation of Wanjiru and her fellow classmates, praised the initiative and emphasised on the need for digital literacy among Kenyans, especially the youth.

On that regard, the CS said, the government will in the next few months put up innovation hubs across the country to enhance information access.

“There are elaborate plans in place to roll out constituency innovation hubs with free Wi-Fi services countrywide by June next year. The project will transform the country and bridge the connectivity gap and spur information access among the youth,” Mr Mucheru said. 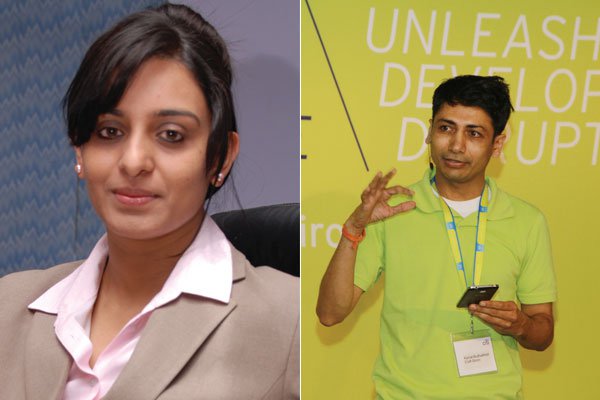 The genesis of the ict programme

Ms Priya Budhabatti, 33, is Indian, though raised in Kenya. After completing high school (she is an alumnus of Ngara Girls High School) Ms Priya got a job at Equity Bank as a cashier.

“The bank was then a microfinance institution where operations were manual, including writing and counting money,” she says, adding she used her salary to pay for evening classes at Nairobi Computer Data Centre, where she studied  for a diploma in ICT.

It was while at Equity Bank that she met her husband, Mr Kamal Budhabhatti, a software developer who had contracted to do business with Equity Bank.

The couple then established Craft Silicon Ltd in 1998, and later founded Craft Silicon Foundation Centre in 2009 to impart ICT skills to youths from less privileged backgrounds on.

“I was born and brought up in a humble background. I attended Kongoni Primary School where I was the only pupil of Indian origin, therefore my life experiences are similar to those of many young girls and youths in the slums. This is what inspired me to start the programme,” she says.

The project targets girls from nine to 13 years.

“We also target young men and women between 18-24, who have completed secondary school and are unable to go further with their education.

There are three intakes every year.

The bus parks either at a nearby DO’s offices or at a chief’s camp in the slums they target.

The training is done in three stages.

On recruitment, to begin with, the students are taught basic computer operations.

In the second stage, they move to the Craft Silicon Foundation Centre, located in Westlands, Nairobi, for advanced ICT training skills.

In the third stage, they learn communication, business and entrepreneurial skills, also offered at the centre.