A drunk driver killed all my kids 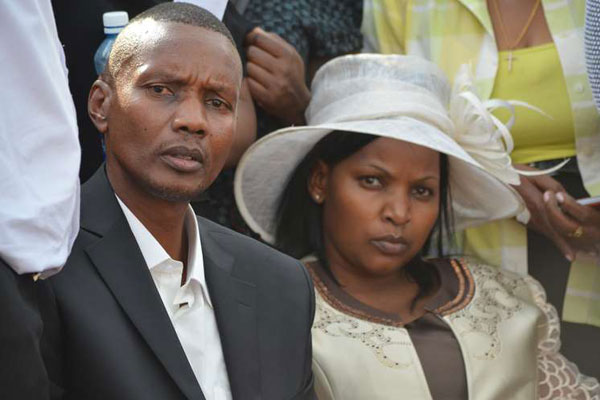 Peter Kibugi and Hanna Wariara at the funeral of their three children and a grandchild. PHOTO | COURTESY

A drunk driver killed all my kids

“Just take a right turn on the track ahead,” the man we ask for directions to the Kibugi home tells us. “You will see smoke on your way down the trail. That’s their gate, right where the smoke is. That’s Mama Njeri’s house?”

And sure enough, we see a smouldering fire near the gate as we approach the home. The smoke swirling gently from the flameless heap of ashes and twigs prepares us for the stillness in the compound.

A huge pile of utensils, including  huge cooking pans, has been left out to dry.  Meanwhile, some people are loading the chairs and tents used during the 10-day vigil for the Kibugis’ departed onto a pickup.

It is the day after the burial of Hanna Wariara Kibugi’s three children and grandchild, and the  mourners have left. Hannah is distraught about the emptiness in the home.

“It is abnormally quiet and still,” she says, “All my four babies are gone.”

It is around 4:30pm on a Friday when we visit for the  interview.

“We would now be waiting for the kids to be dropped by the school bus. And then the noise would begin, she says. “Njoki would be finishing with the cooking. They always found food ready when they arrived home from school.

“Now the house is empty and quiet. The bedrooms are empty. Their clothes are just there, still hanging in the closets,” says a distressed Wariara.

Hannah and her husband, Peter Kibugi, lost all their three children and a granddaughter in a horrific road accident on May 15, as the world marked the International Day of Families.

Their two daughters Josephine Njoki, 25, and Grace Njeri, 11 as well as their 9-year-old son, Mike Mutua and grand-daughter Hanna Wariaria (Njoki’s daughter) were buried on  Thursday, May 26. As their four coffins lay side by side at the Langata Cemetery in Nairobi, the grief was palpable, as friends and family gathered to pay their last respects.

Coffins of the deceased children at the funeral service for the Kibugis children and grandchild. PHOTO | COURTESY

NOTHING SERIOUS, BE STRONG

At the time of the accident, Mr Kibugi was in Qatar in the Middles East where he works, when his phone rang at around 9.30 that night. A man who identified himself only as Nderitu, a watchman near the scene of the accident, read out the registration number of Hannah’s vehicle and asked him whether he recognised the car.

He said he did and asked Nderitu what the matter was. Nderitu told him that the car had been involved in a terrible accident with a lorry.

“I asked him how they [the occupants of the vehicle] were, whether there had been any fatalities but he just took me round in circles.  He said they were waiting for an ambulance and the police,” Mr Kibugi says. Dissatisfied, he got off the phone and started calling relatives.

Mr Kibugi says he  in  shock that night, he did not sleep. It was something that Nderitu had said that was nagging him. “He had said ‘Kibugi niue wi mundurume. No muhaka wiyumirerie.’  Which loosely translates to “Kibugi, you know you are a man. You must remain strong.’”

Mr Kibugi took the  statement to mean there had been fatalities, and immediately started making plans to return home. Meanwhile, he spent the entire night trying to find out details about the accident. But no information was forthcoming, and family members were being evasive.

“My mother and mother-in-law kept me updated, but they were very pleasant the whole time. They said those who were in the car were in hospital and being taken care of, and that I should not worry,” he recalls.

On the third day his cousin called and told him, “We have to be realistic here. Now, I have to give you the news as it is.”

“And that is when he told me all the kids had died in the accident,” Mr Kibugi says.

He took emergency leave so that he could come back home and take care of things.

Similarly, Hannah, who is nursing multiple rib fractures and suffered bleeding in her lungs, did not know until four days later that all her children had perished in the accident.

“I could barely breathe when I was being rushed to Kenyatta National Hospital (KNH), and I think everybody believed that if they told me, I would get worse,” she says, “I constantly asked about the children and I was always assured they were okay, that they would be discharged, and that I should focus on regaining my health.”

However, she doubted this information and kept pestering the staff about her children’s condition.  “From what I had seen of the car, I kept asking myself whether they were really still alive,” she says.

“Mike had been sitting in front next to me while my granddaughter was sitting behind in the middle, between Njoki and Njeri,” she recalls.

It was later that a counsellor at KNH prepared her and broke the news to her in the presence of some clerics and relatives.

“Whenthey told me what had happened I asked , ‘Please repeat what you have just said.’ I was in shock and disbelief,”

Hannah says initially, she was mad at the  lorry driver but has been able to let go of her anger. “I kept wondering why someone would go and drink and then just come and crash into innocent people,” she says.

“They loved to do stuff with me because I always made them laugh. My son loved playing football,” Hannah lets off a distant smile and says, “he is the reason all the picture frames on the wall have no glass. He hit balls everywhere, including the sitting room. Mike often roared like lion. He loved wild animals but he loved the lion the most. And the girls…they loved to play with my hair. My granddaughter always barged into my room in the morning to get me out of bed.

“Being here alone…. entering all three empty bedrooms with our children’s things and clothes still hanging there ….you start thinking, ‘You mean they’re gone, that  I’ll never see them again?’” Hannah says, shaking her head.  “It is hard. We are grateful to all those who have prayed for us. Please keep us in your prayers. God bless.”

“We are very grateful to all the people who have been by our side but after the burial yesterday, there’s just the two of us,” her husband interjects.

“Driving when you’re drunk is very dangerous. It has robbed us of all our children,” he says,“If you must drink, then please get a competent driver or a taxi to take you home. People must stop this issue of Gari inajua nyumbani (The car knows its way home). You endanger the lives of innocent people, as happened in this case,” he says.

“The driver of the  lorry, Tim Johnson Mumo, 35, was drunk. In his state, he could not have been in control,” said Ruiru OCPD Isaac Thuranira. A test  by the police showed that his blood alcohol content was 0.85 per cent above the legal limit.

Even after the accident he just continued dosing. He was taken to court in Thika  the day after the accident and charged with four counts of causing death by dangerous driving, one count of impaired driving causing bodily harm, and driving under the influence of alcohol, among other charges, which he denied, His case will be heard on August 11.

The wreckage of the car after the tipper lorry crashed into  the Kibugis’ scar near the Jacaranda Maternity Hospital. PHOTO | COURTESY

PRELUDE TO A CRUSH

A series of zigzags, then smash!

Hannah recalls the details of the harrowing moments before the accident vividly. She was the one driving the family car when it happened – and the only who survived.

It had been a happy day with the extended family. She was returning from a nephew’s baptism ceremony in Banana. Her three children and her granddaughter had left her mother’s home in Banana, where there had been an after-party, just after dusk. They were heading for their home in Ruai.

At around 8.30pm, they had just taken the turn from the Thika Superhighway down the Eastern Bypass when Hannah noticed an oncoming vehicle do a series of zigzags on the road. Alarmed, she slowed down.

“Then, in what seemed like a split second, he was back on my lane, speeding like a maniac and that was it. I heard my eldest daughter, Njoki, who was seated behind me, scream. I think it was a reflex action  when I saw the lorry hurtling towards us,  but all my attention was focused on trying to get us out of the way of the oncoming vehicle.

There was no time to flash my headlights, hoot, or do any of those civil things. On my left was a row stationary vehicles and after a quick calculation, I realised that I couldn’t go to that side of the road. So I checked the right side and saw that there were no oncoming vehicles. I thought I could swerve to that lane and be safe but as I was doing these calculations, he had already reached us, hit my car and thrown us off the road,” recalls Hannah.

The tipper lorry crashed into  the Kibugis’ scar near the Jacaranda Maternity Hospital.

In that brief moment, Hannah recalls praying incessantly to God to save her life. All the children died instantly.

The windows were shattered on impact. It was dark and cold, and Hannah suddenly realised that she was not even in the car. She recalls constantly struggling to sit up from the ground, where she had been thrown by the impact of the crash, to no avail.

“My body just wouldn’t move. I was in terrible pain, particularly my chest.”

Details of the moments after the accident are hazy, but she says she recalls trying to move towards the car to try and rescue the children because she could see, albeit hazily, how badly the car was damaged.

“At one point on looking up, I thought I saw my youngest daughter’s face plastered on the glass peering through the window,” she says.

For a person undergoing the kind of anguish she must be going through, Hannah looks incredibly strong and keeps a cool head all through the interview as she attempts to give a blow-by-blow account of the gut-wrenching incident. Although at some point when I ask her the names of her kids she seems to be in a sort of trance as she answers, “Three,” then asks almost absentmindedly, “Were they three of four?” To which her husband answers, “four”.

“That driver just killed my innocent kids. I know I am a competent driver. I don’t speed and there he came…just crashed me with his drunkenness and carelessness,” she says ruefully.

Peter Kibugi and Hanna Wariara at the funeral of their three children and a grandchild. PHOTO | COURTESY A drunk driver killed all my kids “Just take a right turn on the track ahead,” the man we ask for directions to the Kibugi home tells us. “You will see smoke on your way down the