by samrack
in Kenya, News, People
A A
0

NAIROBI: It is shortly past 9 o’clock in the morning when we meet Pete Muraya in his office in Nairobi’s Spring Valley. Wearing a checked jacket, black trousers and sports shoes, he is quite casual – a total contrast to the urbane and suave businessman usually dressed in trendy suits. For a moment, I look out of place in my cream jacket, trousers and well-polished leather shoes. “Visiting construction sites is strenuous stuff. There is dust from the soil and cement. You have to dress appropriately and appear to be ‘at home’ by blending in with the rest,” Muraya, who co-owns Suraya Property Group with his wife Sue, says. Suraya, where Muraya is CEO, is one of the biggest private property developers in the country and is currently undertaking nine projects in various parts of Nairobi and its environs. The projects include a new office park in Spring Valley, apartment blocks on Kiambu Road, Riverside Drive, Mbagathi Way, Mombasa Road and Ngong Road. 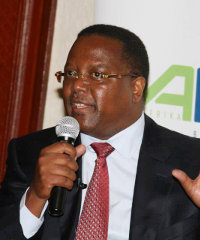 Every Thursday, Muraya and his wife Sue, tour the various sites where construction is ongoing to see how they are progressing. Muraya’s day starts quite early. As a father of four and a husband, Muraya has to ensure that the family is ready before daybreak, especially for the young ones who have to go to school by 6:15 am. Then there is the morning rush to beat the chaotic city traffic and be in the office for staff briefings and business meetings between 7 am and 9 am. Our brief interview at the office is interrupted several times by staff who keep dropping by for a word or two. “We have an open door policy here. There are simply no appointments. They may have a burning issue regarding a client or a project that needs immediate consultation. How can you schedule an appointment for that? We have to enhance a good working relationship with all,” he says. �PROJECTS We then leave for a tour of the company’s projects. Spring Valley Business Park across the road from the office is our first stop.

The project consists of five blocks, one of which will be a three-star hotel. We put on construction helmets, just in case a loose plank of wood comes our way. On hand is one of the developer’s architects who briefs the boss on the progress so far. The two pause inside the middle tower and go through some drawings. There are decisions to be made on the final colour of the walls and the type of tiles to be used. We make our way to the top of the wing next to the main entrance. “This whole block will be the new home to Suraya Property Group. My office will be right here,” he says, pointing to a yet-to-be finished column. “I think the view across the valley is awesome.” If the Chinese contractor on site sticks to the schedule, most of the work will be through this April. Our next stop is Fourways Junction, a Sh6 billion mixed dwelling project between Kiambu Road and the Northern Bypass, hence its name. Again, we are met by a site official who gives us a small tour of the ongoing works. Muraya is excited about the upcoming community centre that consists of a swimming pool, basketball court, changing rooms and a mini bar.

“We have to look for ways of engaging the community here. It would be nice if we can keep even the young ones involved with wholesome activities within the walls,” says Muraya. As we stop near the swimming pool, something catches his attention. The pool lights are yet to be installed despite being paid for. He picks up the phone to call his site manager who has since left for another corner of the property. The call goes unanswered. �AVOID DELAY “You see, if we don’t visit the sites, we would not notice such seemingly minor omissions that can actually delay the entire project,” he says. Near the community centre is an immaculate, British-style house that is home to the Gatabakis, the family that owned the land on which the project sits. Further on, we meet a group of women busy transferring roofing tiles from one location to the Chinese-designed service lifts. The lifts are operated by women.

Our attention then focuses on the Sh100 million sewerage treatment plant. We are taken through the steps that raw sewage has to go through before its eventual release. Standing in the hot sun, the pure water in the ponds is very inviting. It is past noon when we make our way to Sucasa, a starter home project consisting of about 1,000 apartments off Mombasa Road. While many workers would shudder at the mere sight of their boss making unannounced site visits, the ones we come across seem to take the presence of the business magnate in stride. In any case, intimidating them is the last thing on his mind. Before we know it, it is 2 pm. The sun beats down on our heads mercilessly. Rumbling stomachs and aching legs point to a much anticipated break. While enjoying some ugali and nyama choma (roast meat) at a café in Mlolongo, I use the break to find out why a person who has the capacity to employ the best supervisors would spend an entire day doing rounds in close to a dozen projects. “Contractors need constant supervision. You have already seen the number of things we have uncovered so far. Someone will tell you that certain materials are on site while in actual fact they are still lying at the supplier’s yard,” he says. Being an architect is an added advantage for Muraya: “Sometimes, you visit a site and the lead architect tells you there is something that needs some alteration to fit in the design. Ordinarily, that would take quite some time to change due to bureaucracy. However, I am able to make a decision on the spot, sign the paperwork and move on.”

(He graduated as an architect in 1987 and got into property development in 2003 after charging his house for a Sh15 million loan while a friend invested Sh12 million for his first venture, Castle Rock Gardens in Kilimani, Nairobi.) At other times, he is able to tell whether or not the contractor has the needed personnel to handle a particular project. �MINDSET He says a contractor’s initial mindset is to save as much as he can by hiring the right number of workers. “You cannot know all that if you are just seated in the office,” he says. It is way past 4 pm when we leave Loneview Apartments, also on Mombasa Road. Tired and exhausted, we snake along the busy Mombasa Road back to the city centre. I am almost dozing off but the day is yet to end for Muraya. Between the site visits, he has been busy compiling notes on his tablet that he instantly emails to the respective site managers for further action. The notes will form the basis of next week’s site visits.

We would have visited the other projects on Mbagathi Way, Ngong Road and Riverside were it not for the fact that he had a scheduled meeting in the city later in the evening. As we part company, I marvel at how Pete Muraya has mastered the intricate details of each project. But then, that is a typical day in the life of a developer.