74yr-old Kenyan man deported from the US after 42 yrs; he’s back with just a ‘twang’ 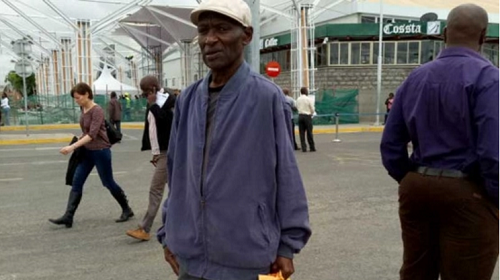 A 74-year-old Kenyan who has been in the US for 42 years arrived back home with just the clothes on his back and a brown envelope with phone numbers.

He was among seven Kenyans who have been deported as the US government continues to tighten its noose on immigrants.

“These were not ordinary people who were hounded out of the streets and then deported. They were involved in criminal acts and some had been in detention in the US correctional facilities,” she said.

Two of them, the Saturday Standard established had been caught trying to cross to Canada using an illegal border point.

The 74-year-old, who speaks with a deep nasal drawl — a twang — moved to the US in 1975. He asked us not to publish his name as he is planning to return. He had been arrested for drunk driving.

“The judge fined me $1,240 which I paid but immediately I got out of the courtroom, I was re-arrested and sent to a detention camp,” he said.

He added that he was in the camp for two weeks before being put on a plane back home.

There are at least 500,000 Kenyans living in the US and they send home at least $82 million a year, which is currently Kenya’s third largest source of forex exchange.

The seven, who recorded statements at the DCI office before being released will however not be charged in Kenya.

“They (the deportees) didn’t commit any offence here, and we cannot start any criminal proceedings against them,” Waweru said.

While they were allowed to walk free after recording statements, their Somali counterparts remained in handcuffs.

This is the second batch of immigrants to be deported from the US in five months.

Share thisFacebookTwitterPinterestEmailWhatsAppThe seven Kenyans are Kihanya Charles, Bota Patrick, Githua Paul, Mose Eliud, Nyachae Bosibori Jackline, Ongori Vincent and Seet Sila. A 74-year-old Kenyan who has been in the US for 42 years arrived back home with just the clothes on his back and a brown envelope with phone numbers. He was among seven Kenyans