2018 REVIEW: Uhuru’s trip to Cuba and life-changing goodies for Kenya 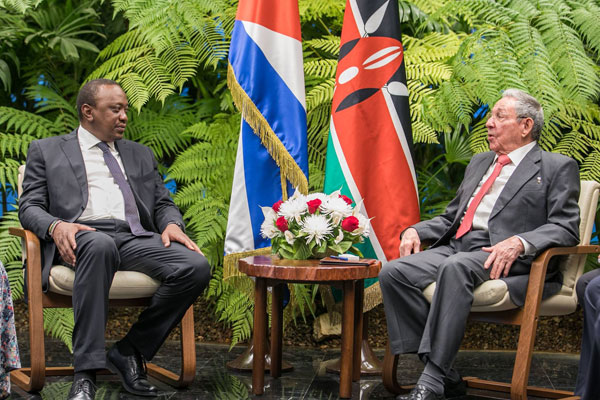 2018 REVIEW: Uhuru’s trip to Cuba and life-changing goodies for Kenya

If you were to ask Foreign Affairs Cabinet Secretary (CS) Monica Juma to name the most memorable State visit President Kenyatta made last year, she will not hesitate to name the historic trip in March to the island nation of Cuba.

The visit came barely a month after the CS was sworn into office and it was the first time a Kenyan Head of State was visiting the Caribbean island nation since the two countries established diplomatic relations in 2001.

It is during the trip that the President sealed a deal that saw 100 Cuban doctors come to Kenya in June. Forty-seven would work as specialists and 53 family physicians would be deployed to the counties.

At the same time, Kenya secured space for its 50 doctors to study in Cuba, famed for its world-class healthcare system.

In an interview with the Nation, Dr Juma described 2018 as the year when Kenya “could not have been at a better place globally”, and how the Cuban trip opened the stage for many other global engagements.

“That State visit to Cuba set parameters of what form we would wish the visits to take in terms of value. We have been very careful in our preparations for State visits since that time,” she said, adding, the ministry has focused on re-engineering State visits.

The CS said that Kenya was reviewing the relationships it has with other nations to monitor progress and seek room for improvement.

“What has happened in the last 10 months is the insistence of making sure that every move is bringing returns that are concrete and measurable, and it has been very deliberate in doing so,” Dr Juma said in reflection of a year that saw Kenya attract global attention.

The CS spoke just a few days after Kenya organised the inaugural global Blue Economy Summit co-hosted with Canada and Japan — a forum that brought together leaders to discuss the untapped potential of the oceans, lakes, and rivers.

Other highlights of Mr Kenyatta’s global agenda were his meetings with US President Donald Trump in Washington DC, British Prime Minister Theresa May in Britain and Chinese president Xi Jinping — all within seven days!

While in China, the President, who visited the Asian giant again in September, was seeking to steady an uneven balance of trade. He was also seeking to cement past strong relations with Washington and London, with the latter being a prime source of market for Kenya’s goods, and the former, opening up new frontiers, including direct non-stop flights to New York.

This year, the President will host French President Emmanuel Macron, who will also be attending the fourth session of the UN Environment Assembly tagged UNEA-4, from March 11 to March 15, 2019, Dr Juma said, adding that Italian Prime Minister Giuseppe Conte will be in Kenya in February.

Kenya is seeking a non-permanent member slot in the UN Security Council for the period 2021-2022, citing the 44 peace missions it has participated in, and the strategic role it has played in counter-terrorism.

Since his March 2013 election, President Kenyatta has made 77 foreign trips — more than double the 33 visits his predecessor Mwai Kibaki made in his 10-year rule.

Of these, President Kenyatta undertook 49 State visits that the ministry of Foreign Affairs has defended, saying, the trips had brought “immense benefits” to the country.

The other 27 are those he attended as treaty obligations like those of the East African Community, the African Union, Intergovernmental Authority on Development and the United Nations, among others.

Even as it straddles the global stage, Dr Juma wants Kenya to compete with continental giants like South Africa, Nigeria and Ghana in an expansionist drive that will see Nairobi open 12 new diplomatic offices in Africa within the next three years.

“We have not had the most optimal footprint in Africa and because we know you cannot deepen any relationship if you do not have an imprint, our policy is Pan-African because we believe Kenya is inextricably tied to the destiny of the continent,” she said.

At the same time, Kenya has intensified negotiations with other countries on visas, following President Kenyatta’s declaration that Africans will be allowed to get a visa at the point of entry.

East Africans will enjoy privileges similar to Kenyan citizens and will access the country with just an identity card.

Kenya has scored big with South Africa, which last month announced that students will be given visas for the duration of their studies. Previously, Kenyan students in South Africa had to come back to Nairobi to renew their visas before going back to continue their studies.

The country also scored big with Mozambique on visas. It has also led peace talks in South Sudan, besides having a peace-keeping mission in Somalia within its regional security agenda.

2018 REVIEW: Uhuru’s trip to Cuba and life-changing goodies for Kenya Reviewed by samrack on January 1, 2019 .

Share thisFacebookTwitterPinterestEmailWhatsApp2018 REVIEW: Uhuru’s trip to Cuba and life-changing goodies for Kenya If you were to ask Foreign Affairs Cabinet Secretary (CS) Monica Juma to name the most memorable State visit President Kenyatta made last year, she will not hesitate to name the historic trip in March to the island nation of Cuba. The visit