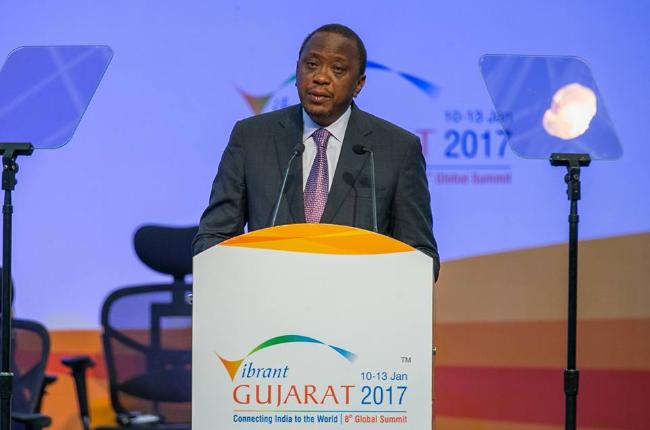 The President encouraged the investors to venture into Kenya and explore existing business opportunities, saying his Government has undertaken a wide range of regulatory reforms that have significantly reduced the cost of doing business.

“The Indian Investors already in Kenya will testify that we are an open and safe investment destination, with a favourable business environment facilitated by my Government’s efforts to improve business regulation procedures and requirements,” President Kenyatta said.

President Kenyatta was addressing the 2017 Vibrant Gujarat Global Summit at the Gujarati city of Ahmedabad in India where he was the chief guest at the high-level business forum that was inaugurated by Prime Minister Narendra Modi.

The President observed that his Government’s efforts to improve business environment was recognized by the World Bank in its 2015 publication on ‘Doing Business’ which reported that Kenya has moved up 28 spots from 136 in 2014 to 108 in 2015 on the ease of starting a business, dealing with construction permits, getting electricity, registering property, getting credit and paying taxes.

To enhance Kenya’s investment attractiveness, President Kenyatta said his Administration has prioritized infrastructure development to spur growth and job creation in all sectors of the economy.

“We have invested in mega projects and opportunities that include expansion of the Port of Mombasa, airports, transport corridors, rail links and Special Economic Zones to make Kenya a global economic and business hub,” the President said.

Saying there are still opportunities within the infrastructure sector for Indian businesses to invest in, President Kenyatta added that Kenya’s economy is the largest and most integrated in the Eastern Africa region with significant utilization of technology and innovation in businesses.

He pointed out that Kenya also has one of the highest mobile telephony and internet connectivity on the African continent as well as a highly educated, sophisticated, creative and enthusiastic human resource pool and an advanced financial services sector to serve any kind of investment.

“Kenya’s central geographical position in the East and Central Africa region is ideal for investors to use as a launch pad to penetrate the enormous market of over 650 million people of the Tripartite Free Trade Area arrangement which brings together 26 countries in northern, eastern and southern Africa,” the President added.

President Kenyatta also informed Indian investors that Kenya has leveraged its political and diplomatic conferencing prowess in the East and Central African region to attract major international events and conferences, bringing many global political and business leaders to the country.

“This demonstrates the confidence the international investors have in Kenya, which makes the country stand out amongst emerging economies,” President Kenyatta said.

Citing the African Development Bank which indicated in its 2015 outlook that Kenya defied both domestic and global challenges to attract USD$1.9 billion in Foreign Direct Investment in 2015, the President said the Kenyan economy has proved it is stable and growing.

He added that the World Bank projected a continued robust growth trajectory, at 5 per cent in 2016, which is higher than the global average of 1.5 per cent.

In 2015 Bloomberg reported that Kenya was the third fastest growing economy in a global survey of 57 economies, placing Kenya alongside China, India, Philippines and Indonesia as the only economies expected to attain a growth rate of over 5 per cent in 2016.

“These indicators show that we are doing the right things to build a conducive business environment to ensure robust growth. We invite you to join in these efforts for a win-win mutual-benefit result,” President Kenyatta urged the Indian investors.

The President singled out transport, water and energy, mining extractives and exploration, medical facilities, pharmaceutical production, fertilizer production, manufacturing, value addition in agriculture, industry and tourism as well as emerging sectors of Information and Communications Technology, and pharmaceuticals as areas open for investment.

“I am optimistic that the outcomes of this dialogue and networking with the Kenyan delegation that includes government representatives and the private sector will be mutually beneficial to the private sector of the two countries,” President Kenyatta said.

Noting that the State of Gujarat is an important economic powerhouse of India with expertise in sectors and industries Kenya that would wish to benchmark, the President urged Gujarat investors and Kenyan entrepreneurs to forge partnerships with mutual benefit in mind.

Prime Minister Modi said India is a rising star in the global economy with its middle class offering a vast market to investors.

Earlier, President Kenyatta separately held talks with Prime Minister Modi and President Paul Kagame of Rwanda on the sidelines of the summit.