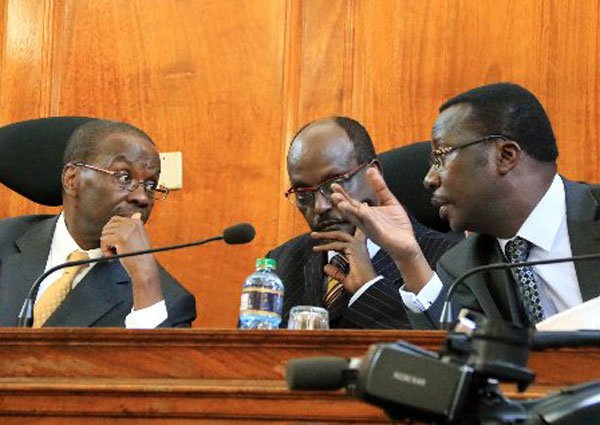 From left: Supreme Court Judges Willy Mutunga, Mohamed Ibrahim and Smokin Wanjala confer during a court proceeding on June 2, 2016 at the Supreme Court. Six candidates have been shortlisted for the position of chief justice. PHOTO | JEFF ANGOTE | NATION MEDIA GROUP

Judicial Service Commission (JSC) members wound up their interviews for a replacement of former Chief Justice and President of the Supreme Court Willy Mutunga, and retreated to pick the lucky man or woman.

Yesterday, the commissioners concluded interviews with 11 candidates fielding questions on their professional competence, personal integrity and views on judicial reforms and administration of justice. JSC will now have the arduous task of ticking off the strengths and weaknesses showed by each of the candidates and picking out the best. The new CJ will automatically be the one to preside over any upcoming presidential election court suit and even the subsequent swearing-in ceremony after next August’s elections. The grueling interviews were characterised by tough questions touching on the candidates’ careers, experience, achievements, intellectual capabilities, personal lives and controversies. JSC had initially shortlisted judges Alnashir Visram, Mbogholi Msagha, David Maraga, Roselyn Nambuye, Smokin Wanjala and Nzamba Kitonga but expanded the list following a court order. Those given a second chance were Justice Jackton Ojwang, retired Judge Aaron Ringera, US-based law lecturer Makau Mutua, Mr Daniel Wambura and Ms Lucy Wanja. Mr Paul Udoto Kongani and Mr David Waihiga opted out of the race. READ MORE I stand by my statement about Mr Kenyatta, says CJ hopeful Mutua CJ candidate to stop media coverage if given job Our undoing is leadership with no moral conscience All the candidates agreed that corruption was a major problem in the Judiciary, with reducing case backlogs and dismantling cartels being their top priorities.

However, the interviews were not devoid of controversy and light moments. At one point, Prof Makau and Prof Ojwang’s grilling turned to a battle of wits involving legal scholars when they took on commissioners Prof Githu Muigai and Prof Tom Ojienda. Justice Visram’s vision is to have a permanent directory to check corruption in the Judiciary, digitise case administration in the Judiciary and reduce case backlogs. “My strengths lie in the number of my accomplished work. I led a small team of judges in Nyeri and was able to eliminate the case backlog within a short time. I have also been the chair of the rules committee and the mediation committee in the Judiciary,” said Visram. He was however put to task over his past judgments where he awarded former minister Nicholas Biwott Sh25 million in a defamation suit and his suit against The Standard newspaper where he was awarded Sh26 million.

Apart from maintaining that he will not withdraw a tweet he wrote in 2013 that he will not recognise President Uhuru Kenyatta, Makau stood out as an independent-minded candidate whose troubled past and life in exile had not interfered with his understanding of the Kenyan judicial system.

“I am my own man not carried by anybody and I believe my independence will be valuable to the Judiciary. I do not belong to any political party but consider myself as a social democrat who believes in the rule of law,” said Makau. Justice Maraga’s vision is to restore public confidence in the Judiciary by reducing the case backlog and introducing a hotline for people to report cases of corruption within the Judiciary. According to the judge, his experience as judge in several stations makes him capable of leading the Judiciary. He said he is an independent judge who cannot be influenced by outside forces. He openly disagreed with Supreme Court in their ruling of the presidential election petition in 2013. Justice Msagha explained that he wanted to follow Dr Mutunga’s footsteps in implementing the Judiciary transformation agenda and that his focus will be to retrain judicial officers to inspire public confidence, reduce case backlogs, motivate judicial staff, promote judicial independence and dialogue with other arms of government to avoid conflict of interest. He was however at pains to explain some of his past controversial judgments. He also gave hope to judges who were unfairly sacked that he will give them room to seek compensation. READ MORE I stand by my statement about Mr Kenyatta, says CJ hopeful Mutua CJ candidate to stop media coverage if given job Our undoing is leadership with no moral conscience The Judiciary purge in 2003 came back to haunt Justice Ringera, but he maintained that he has adequate skills necessary to be make him to be entrusted with the CJ post. His belief was in the vision of the Judiciary and the core values of integrity, fidelity to the law, and courage. Mr Kitonga was the first candidate outside the Judiciary to be interviewed for the post, but promised that his lack of experience in the Judiciary will not stop him assuming the roles of CJ. “There has been the politics of insider and outsider in the Judiciary which is only meant to divide the legal profession. Lawyers are not outsiders; we go to court every day and understand the struggles. It is not true that I lack the Judicial experience to be the CJ,” argued Kitonga. Dr Wanjala admitted that their decision at Supreme Court in 2013 on the presidential election was widely criticised, but that he has the capacity to handle another petition if appointed the CJ. According to the judge, elections petitions will always annoy a section of the Kenyan public no matter which ruling you make. “If appointed, I will continue with the transformative agenda started by Dr Mutunga and take it to a logical conclusion before embarking on the innovation agenda. I will also fast-track the setting up of an International Crimes Division in Kenya,” said Wanjala.Justice Nambuye argued that her strength lies in her long experience as a judge that spans 38 years, and that she has the capability to clear the case backlogs.

Prof Ojwang said his vision is to bring cohesion in the Judiciary and to ensure judges are respected and that no judicial officer is exposed to embarrassment. According to the judge, Kenyans expect efficient and corruption-free courts from the magistrates court to the Supreme Court. Prof Mutua, Prof Ojwang and Dr Wanjala were the most learned with deep understanding of academic procedures of law having been law lecturers in various universities across the world. DEATH SENTENCE The candidates’ religious beliefs also came into play, with Justice Maraga maintaining that he would not compromise his staunch Seventh Day Adventists beliefs because of work. READ MORE I stand by my statement about Mr Kenyatta, says CJ hopeful Mutua CJ candidate to stop media coverage if given job Our undoing is leadership with no moral conscience “It will be very difficult for me to sit on a Saturday to hear a case. It is only a matter of life and death that can make me miss church service and I would rather talk with my colleagues in the court to accommodate me and exempt me from sitting if the hearing extends to a Saturday,” said Maraga. Visram said he is a Muslim of the Ismaili community, Dr Wanjala said he is a Catholic, while Justice Mbogholi, Justice Nambuye, Justice Ojwang, Justice Ringera and Mr Kitonga explained they were Christians but did not give their denominations. Makau is the only candidate who said he does not belong to any organised religious organisation, but that there are some religious values that he finds to be admirable. The candidates could not however offer a conclusive answer on how they would deal with controversial issues like same sex marriage, abortion, death sentence, atheist, gays and lesbians, and intersex persons.
Read more at: http://www.standardmedia.co.ke

FOCUS NOW SHIFTS TO JSC AS INTERVIEWS FOR CHIEF JUSTICE SLOT COME TO A CLOSE Reviewed by samrack on September 15, 2016 .