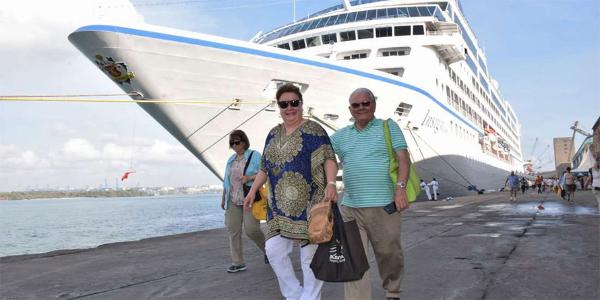 MS Insignia, a luxury vessel operated by Oceania Cruises, called at the Port of Mombasa on Thursday with 1,066 tourists, marking a buoyant end to the current tourist season.

“We are happy to conclude this season with the final ship. Since last year, October, confidence of tourists for Mombasa has been growing. There has been growth of cruise tourism in this country,” Mr Osero said.

He said KPA is keen to ensure the cruise ship terminal is completed before the new season.

“We are making commendable progress on the reception terminal. It will be ready before the next season. This will play a crucial role in attracting even more vessels.” He added.

“Looking from the trend this season, we have faith and confidence that we will have more cruise ships in the coming season,” he said.

In December 2016, the government launched the building of a Sh350 million world class cruise ship terminal. Port operations manager Bwanaheri Lali, while receiving the 680 passengers and 386 crew members, said he was pleased to have the last vessel this season from Zanzibar.

“We are happy to have had at least six cruise ships visit Mombasa. We will continue to support the sector to ensure smooth running of the industry,” Mr Lali said.
Mombasa Tourism chief officer Rabia Salim said the rising number of visitors to the port city is encouraging.

“We are really excited at the prospects of the growth we have had in tourism. Despite the elections and other issues we have had a 10 per cent growth. This spells very good news for us. This means there is a positive information about Kenya out there and we are looking for more,” Ms Rabia added.

1,000 tourists arrive as high season ends MS Insignia, a luxury vessel operated by Oceania Cruises, called at the Port of Mombasa on Thursday with 1,066 tourists, marking a buoyant end to the current tourist season. Kenya Ports Authority (KPA) head of corporate affairs Bernard Osero said the season has been a success with tourist