10 places to visit in Kenya 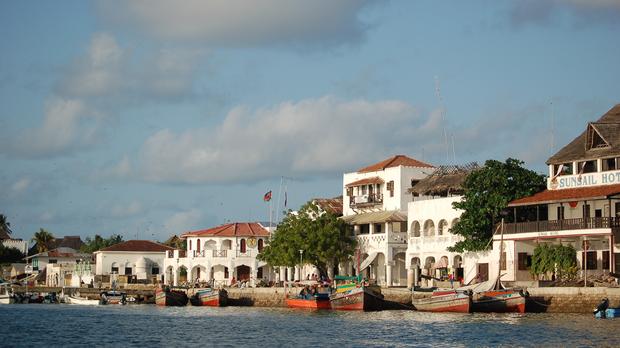 Lamu Island is a world away from mainland Kenya. Pic: YouTube

10 places to visit in Kenya

From the bustling streets of Nairobi to the coastal peacefulness of Mombasa and the intriguing and eye-opening landscapes of safari reserves, Kenya is one of Africa’s jewels.
But Kenya is also growing as a centre of commerce in East Africa. For both business trips and leisure travel, Kenya has much to offer its visitors.
1. Masai Mara Game Reserve:
Photographs and film cannot begin to be equivalent to seeing the amazing Big Five game—lions, African elephants, Cape buffalo, leopards, and black rhinoceros—right in front of you during a safari. “Big Five” is a traditional hunting term that refers to the five animals most difficult to hunt, given their aggressive nature.
2. Wildebeest Migration at Masai Mara:

From July to September, one of the most magnificent of events takes place throughout the Masai Mara Game Reserve. The wildebeest migration comprises hundreds of thousands of wildebeests, zebras, gazelles, and other animals in a stampede for grazing land. While one can observe the move from a safari vehicle, we highly recommend the renting of a hot air balloon for viewing the wildebeest migration or even just to see the beauty of the Mara.
3. Nairobi:
Nairobi is teeming with activities, foods, and naturally beautiful phenomena. Whether you are looking to go shopping in a mall or an outdoor market, eat traditional Kenyan cuisine, hike in a game reserve, or roam the busy streets of East Africa’s largest city, Nairobi is worth a few days of your time.
4. David Sheldrick Wildlife Trust and the Giraffe Center:
These two animal centres stand out as offering some of the best daytime activities in Nairobi. The David Sheldrick Wildlife Trust specializes in raising orphaned elephants and black rhinos and reintroducing them to the wild. Every morning, visitors can watch the elephants be fed and bathed.
5. Nairobi National Park:
With giraffes in one direction and skyscrapers in the other, this park is the only protected area in the world in close proximity to a capital city (it’s seven kilometres from Nairobi). More than 400 species of birds having been observed—as well as leopards, lions, cheetahs, zebras, giraffes, black rhinos, and more—the Nairobi National Park, is worth a day’s visit.
6. Fort Jesus and Old Town in Mombasa:
Mombasa’s Fort Jesus stands at the crossroads of the city’s tangled history with Europe and the Middle East. The Portuguese built this stronghold in 1593 and spent the next hundred years fighting with the Arabs to maintain control. When the British ruled Mombasa, the fort was turned into a prison, and in 1958 the area was made a national park.
7. Lamu:
This one-vehicle island is a world away from mainland Kenya, with its 1700s-era architecture and predominantly Muslim population. If you’re on the water, take a ride in a dhow , a traditional Arab sailing vessel; if you’re on land, walking is the best method to explore places like Lamu Town, where you can eat fresh seafood and explore winding streets and colourful markets.
8. Mount Kenya:
The second-highest mountain on the continent of Africa, Mount Kenya is located in the central region of the country. While reaching its summit requires some prior mountaineering experience, many lesser peaks and beautiful glaciers are accessible by hiking paths. The mountain trails are perfect for viewing wildlife and flora.
9. The Karen Blixen Museum:

#dkbiz has been in #Kenya for over 100y. Visited Karen Blixen museum today with @DanskIndustri, where #dkbiz @grundfos now provides water. pic.twitter.com/2GcbawU404

Karen Blixen Museum was once the centerpiece of a farm at the foot of the Ngong Hills owned by Danish Author Karen and her Swedish Husband, Baron Bror von Blixen Fincke. Located 10km from the city center, the Museum belongs to a different time period in the history of Kenya.
10. The Ruins of Gedi:

The ruins of Gedi are a historical and archaeological site near the Indian Ocean coast of eastern Kenya.
Set in an idyllic location on the Indian Ocean, and buried deep in a lush forest, the town was thought to have been founded in the early 13th-century. It is one of many medieval Swahili-Arab coastal settlements that stretch from Mogadishu, Somalia to the Zambezi River in Mozambique.
10 places to visit in Kenya Reviewed by samrack on March 5, 2019 .

Share thisFacebookTwitterPinterestEmailWhatsAppLamu Island is a world away from mainland Kenya. Pic: YouTube 10 places to visit in Kenya From the bustling streets of Nairobi to the coastal peacefulness of Mombasa and the intriguing and eye-opening landscapes of safari reserves, Kenya is one of Africa’s jewels. But Kenya is also growing as a centre of commerce