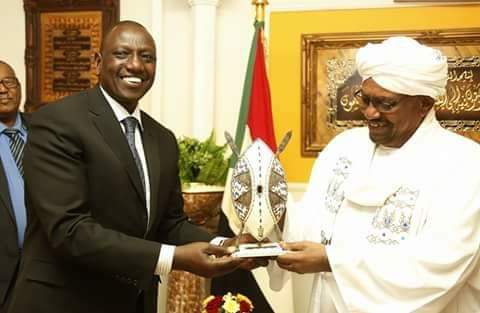 Deputy President William Ruto early this week made whirlwind trip to the Republic of Sudan, where incidentally he has made several clandestine trips in the last one year, Kenyan News Day can reliably reveal.

Ahead of his trip to Sudan, the DP sought the use of Kenya Air Force VIP aircraft, a request that was promptly declined by State House, forcing the DP to charter a private jet from Phoenix Aviation, registration 5Y-WHB Cessna 560XL Citation Excel.

The privately chartered jet flew Ruto and his entourage to Khartoum and parked at the Airport overnight as the DP took another private jet to Atbara airport.

What raised eyebrows was Ruto’s requirement for a military jet whose overfly permit would have to be obtained by the Ministry of Defence leading state intelligence to flag the trip which was deemed suspicious since the request for military aircraft was seen as a means to avoid customs inspections and other security scrutiny that commercial flights usually undergo.

From Nairobi, Ruto’s flight made a brief stopover in Khartoum with his ultimate destination being the North-Eastern city of Atbara, which has for decades been the retreat of former President Omar Hassan al-Bashir.

According to a source which did not want to be identified, DP Ruto had established close business links with al-Bashir who was recently sentenced to two years jail term at a social reform facility for the elderly after being convicted of money laundering and corruption. It was critical that the DP meets with the Sudanese businessmen.

Ruto’s pointman in Sudan, Kenya’s Ambassador Arown Kolil Suge, joined other passengers on the trip to Atbara where they held meetings and spent the night.

What has continued to baffle diplomatic observers is, at the behest of the DP, Ambassador Suge refuses to leave his station following his expiry of his three year tenure.

Ruto’s trip to Sudan was made soon after the abrupt jailing of al-Bashir whose partners operate a pan-Arabic logistics firm fronted by Mike Douglas, Ska-Arabia International Group headquartered in UAE, but with offices in Sudan, Iraq, Uganda Somalia and Sudan.

Osama was used extensively by the regime of al-Bashir to conduct international business using the Ska-Arabia Group after the US government imposed economic sanctions on the Sudanese regime for human rights abuses in Darfur and for sponsoring terrorism.

It is feared Ruto was among regional leaders who helped Bashir breach international sanctions with intricate money laundering schemes that involved movement of cash in the Kenyan banking system.

The international sanctions on Sudan meant that not a single Sudanese bank had been able to operate a US dollar bank account anywhere in the world. 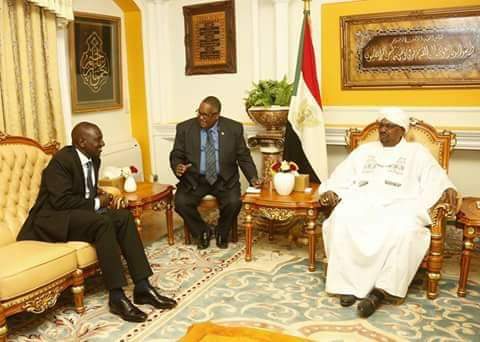 Kenyan News Day established that the shadowy Sudanese Arab businessman Osama also works closely with Uganda’s aging dictator Yoweri Museveni whose family business interests are intertwined with those of al-Bashir and Ruto. This is primarily the reason Ruto has made several trips to Uganda to see Museveni in his private capacity.

But for Ruto to undertake a clandestine trip by private jet without meeting his immediate boss President Uhuru Kenyatta, intelligence sources in Nairobi said it meant something important needed to be air-freighted urgently and safely into Nairobi.

Al-Bashir’s jailing for money laundering and corruption has seriously complicated business matters for Ruto. The Sudanese president was a source of cash for Ruto, most of which were sent as US dollar currency notes in diplomatic bags which avoided conventional banking systems and were not subject to customs verfication.

At the same time, the Kenya government have systematically cut-off the DP’s local sources of cash, that included the unveiling a newly designed currency note that has left those hoarding old currency notes with billions of valueless currency.

According to the Central Bank of Kenya, up to Sh7.3 billion of the older Sh1,000 notes were not returned for exchange in the banking system by September 2019 deadline. It has been reported that Ruto and some of his allies had been holding the illicit cash in their home bunkers in anticipation of using the funds for future political campaigns.

To add to DP Ruto’s frustrations, in 2019 alone, several governors who are known allies of DP Ruto were suspended from office due to abuse of office and corruption. These governors were believed to be corruptly awarding lucrative tenders to firms associated with DP Ruto.

Additionally, the government cancelled licences of highly liquid sports betting firms linked to Ruto even as heads of parastals such as NHIF, Kenya Pipeline, Kenya Power and Kenya Ports all of whom were perceived to be close to Ruto were unceremoniously removed from office on corruption charges.

While Ruto continues to donate tens of millions shillings to church and other social causes each week, observers of Kenya’s vibrant political scene were raising questions as to the source and businesses Ruto could potentially recoup his investments.

Intelligence sources say Ruto faced a severe cash crunch to reasonably sustain his philanthropy as well as his large pool of political hangers-on.

This unfolding financial crisis is what informed Ruto’s foreign trip to Uganda in December and this week to Sudan. In fact, Kenyan News Day established that Solomon Kiptum, a close Ruto associate who works with the Kenyan National Intelligence Service, made an advance trip to Sudan two weeks before Ruto himself flew there.

Kiptum organizes all the logistics for Ruto’s entourage in Sudan and is usually the middleman who collects money from the desperate Sudanese businessman eager to clean their proceeds of corruption but unable to do so due to international sanctions against al-Bashir.

From his base in Khartoum, Ambassador Suge regularly breached his diplomatic immunity as he received and freighted millions of dollars to Ruto from al-Bashir and his business associates having promised the Sudanese Arabs and Somalis based in Atbara State that Ruto’s government will protect and give them facilitation to Kenya’s banking system to conduct money laundering operations through Kenyan government mega-contracts when he becomes president in 2022.

As Ruto departed Atbara to connect to Nairobi, we established that Ambassador Suge was scheduled to travel to Port Sudan to handle some sensitive business on behalf of the DP.

Our source in Atbara intimated that Ruto departed with a large cargo of what is believed to be millions of dollars which is to be used to fund his political campaigns in Kenya since the Arabs believe Kenya’s unique position offers an economic lifeline.

For this reason they must therefore fund Ruto to become President of Kenya, starting with a war against the Building Bridges Initiative and the proposal to hold a constitutional amendment referendum.

Share thisFacebookTwitterPinterestEmailWhatsAppEXCLUSIVE: Unravelling Ruto’s huge money laundering trip to Republic of Sudan Deputy President William Ruto early this week made whirlwind trip to the Republic of Sudan, where incidentally he has made several clandestine trips in the last one year, Kenyan News Day can reliably reveal. Ahead of his trip to Sudan, the DP sought