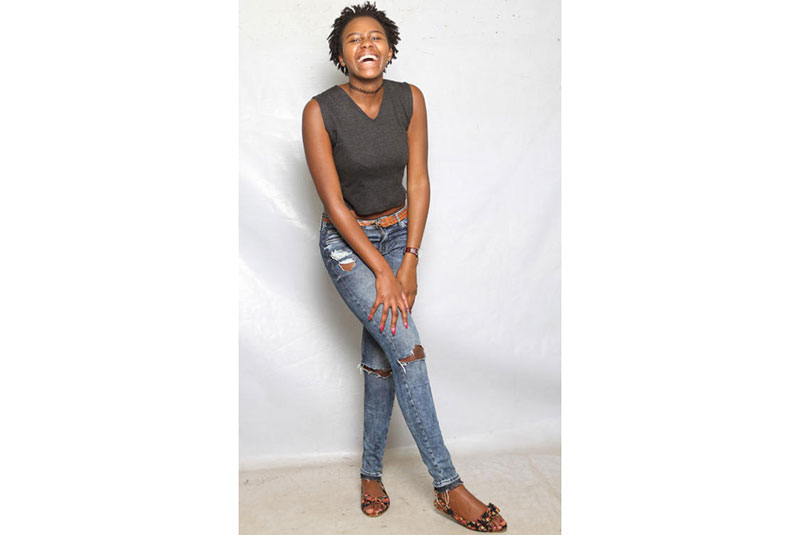 Treasa Mbeka moves restlessly in her seat and mops her sweaty brow with a single swipe of the back of a trembling hand. She frantically scratches her head with the tip of her finger as she tries to desperately recall details that led to her being admitted in hospital where she was diagnosed with schizophrenia, a type of mental illness characterised by among other things, disorganised thoughts. She avoids eye contact.

“I am very anxious right now and my mind is still all over. There is a lot I want to tell you but I just can’t put everything in order, unless I use my notebook,” says Treasa Mbeka while fishing out a green notebook from her handbag with a shaking hand.

She pauses for a while and sighs heavily before she flips through the pages to a place where she has recorded her experiences from the night she was rushed to hospital.

While the 22-year-old passes for a reserved college girl, those who know her well will tell you a different story. Before she was diagnosed with the mental illness whose symptoms include delusions, hallucinations, and other cognitive difficulties and mental breakdown, Treasa was an energetic girl leading a gratifying college life at the United States International University Africa. She juggled classes with a fashion blog, a fashion slot in this publication and also attracted large viewership on her youthful YouTube channel titled ‘Sincerely Didi’ where she showcases fashion and related tips.

It was on this channel that she revealed her health status in a video that has since seen her followers, mostly her fellow college students show support to her in her steps to recovery. It all started when Treasa visited her grandparents in Kisumu to check on an ailing grandfather.

“At the moment, wild thoughts started flooding my mind. My grandfather and I were very close and seeing him in that state filled my mind with all sorts of imaginations. I mostly pictured him dead. Then I started seeing things that none of my family members were seeing even while I was wide awake,” explains Treasa.

From that time, her health took a downward plunge and she recalled every bitter detail of her life, including a painful breakup with a boyfriend.

“There was a time she went for five straight days without sleeping at all. Everyone at home knows that Treasa loves a lot of sleep and her new condition worried us a lot,” narrates Stephanie Mbeka, Treasa’s sister.

The sister recalls the night of April 28, when Treasa kept screaming for hours and would not go to bed even after taking sleeping pills. That night, the family rushed her to Nairobi South Hospital after which she was transferred to Karen Hospital.

At Karen, she was diagnosed with hyperthyroidism, a condition where the enlarged thyroid gland produces too much hormones and causes hormonal imbalance in an individual.

When her situation did not improve, Treasa’s family took her to Chiromo Lee Medical Centre, a mental health clinic that admits patients with various kinds of mental illnesses including anxiety disorder, bipolar disorder and schizophrenia. By this time, her heath had deteriorated and she was admitted for three weeks that were characterised with rigorous treatment.

“At some point, I thought I was dead because I was not in control of my senses,” says Treasa.

Her sister adds: “She was a like a zombie because she wasn’t talking, eating or even moving. When she got better she didn’t want anyone around her, not even her own family. The only person Treasa wanted around her was her boyfriend but he couldn’t visit her despite knowing the condition she was in.”

As part of medication, Treasa was exposed to electroconvulsive therapy, a procedure done under general anesthesia, in which electric currents are passed through the brain to trigger a brief seizure. Treasa confesses she has never undergone more pain.

“It is done to resuscitate people. Imagine being electrocuted in the brain,” she says.

Though Ms Mbeka is on medication – she goes for monthly injections – she does most of mind therapy on her own with the help of her friends.

“I also read lots of Bible verses and read a lot of and survival stories from Schizophrenics. I also watch inspirational videos from TED talks and Oprah Winfrey and basically try to avoid people with negative energy because being around them is not useful to my condition,” says Treasa.

She confesses that she is in a better place. Now back to blogging and creating YouTube videos, she mostly to shares her experience with the mental condition.

“I couldn’t do anything alone including going to the toilet. I thought people were watching me or that someone was coming to attack me. I couldn’t even recognise my own dad. I was in really bad shape,” she says, adding that she is now reaching out to schizophrenic people to encourage them in their struggle with the condition.

Faith Nafula, a private psychiatrist in the city says the hyper nature of the university surrounding can easily aggravate the condition of people with mental disorders.

“A lot goes on in a university and it may not help for someone with a mental disorder to get too much involved in every hype,” says Ms Nafula.

Even then, what helps young people with schizophrenia eventually is sticking to people who understand them and those who offer them strong psycho-social support, says Ms Nafula.

According to the psychiatrist, the fact that Treasa is ready to share her own story about the condition that is still stereotyped shows that she is on a positive journey to recovery, and to help people with similar condition while at it.

“The university is major transition in a student’s life since it presents many challenges that one must adjust to. For some, it is usually the first time for them to take full charge of their lives. This comes with a lot of pressure on them,” says Mr Ngugi.

According to the student counselor, most of the cases that are lodged with the counseling office are thus usually inclined to mental disorder. Some, he says, which appear as petty as distress from strained relationships or petty theft cases often trigger various mental conditions.

To deal with this new reality, the student counselling office at Karatina University has employed a Diagnostic and Statistical Manual of Mental Disorders, a tool against which mental disorders are measured.

Trained counselors in the offices listen to the students’ emotional state after which they decide whether or not the experiences are diagnostic features of a mental disorder. If the results are positive, the office engages services of a psychiatrist.

Treasa Mbeka 22-year-old Treasa Mbeka’s untiring battle with schizophrenia Treasa Mbeka moves restlessly in her seat and mops her sweaty brow with a single swipe of the back of a trembling hand. She frantically scratches her head with the tip of her finger as she tries to desperately recall details that led to her being